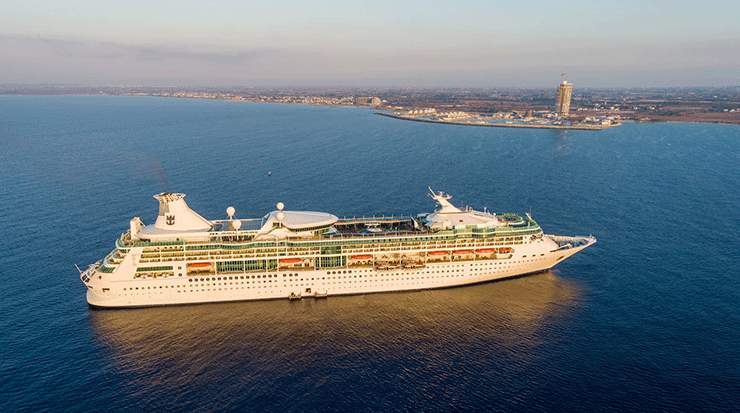 Rhapsody of the Seas

Rhapsody of the Seas anchored at Ayia Napa Marina on September 20 at 7 am, transporting almost 3,000 passengers and crew. Passengers had the opportunity to visit monuments, traditional sites, and beaches in the unoccupied Famagusta district, as well as the Ayia Napa Marina Commercial Village.

The occasion marks another significant milestone for Ayia Napa Marina, highlighting its role as a major port of call for cruise ships, while paving the way for further development in the unoccupied Famagusta district, especially during the critical autumn and spring months when tourism declines.

The Ayia Napa Marina management is continually striving to establish the iconic project as a key maritime destination in the Eastern Mediterranean, and most notably, as a significant development hub in the unoccupied Famagusta district for the benefit of the Cyprus economy as a whole.

A simple ceremony welcoming the cruise ship captain and officers was attended by Ayia Napa Marina representatives including CEO, Stavros Caramondanis and Marina Director Costas Fitiris, as well as the Minister of Transport, Communications and Works, Yiannis Karousos, the Deputy Minister of Shipping, Vassilios Demetriades and Ayia Napa Mayor, Christos Zannetou. They all expressed their satisfaction that Ayia Napa Marina is now a major port of call for cruise boats, following tireless efforts by the Ayia Napa Marina management and competent ministries and services.