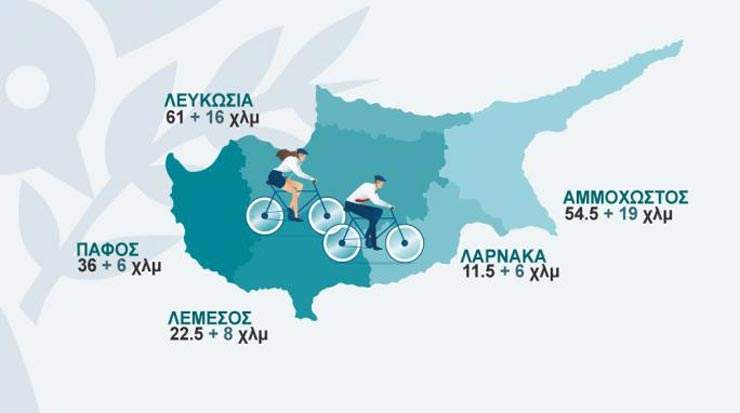 Ministry of Transport, Communications and Works to Promote Cycling

As part of the actions of the Cyprus Ministry of Transport, Communications and Works to promote cycling as a means of transportation, as well as the multimodality of traffic, another 55 km of bike lanes are being launched by the State to be added to the existing 186 km of existing bike lanes.

A total of 17 actions are underway to promote cycling and active trafficking in general. The existing cycling infrastructure covers 186 km throughout Cyprus.

In addition, through the implementation of the Sustainable Urban Mobility Development Plans (SBAK), the Ministry of Transport plans to build an additional 18 km of bike lanes in Limassol and 23 km in Larnaca. Both projects have been included for funding in the Recovery and Sustainability Fund.

At the same time, aiming at the promotion of cycling as a means of transportation, the connections of all unconnected bike lanes are promoted. It is also pointed out that in the planning of all urban projects is foreseen the creation of bicycle paths, which, among other things, are connected with the educational, administrative, sports and commercial centres.

In addition, seeking to create shared spaces for all road users (pedestrians, cyclists, motorists), the Ministry of Transport is lowering the speed limit to 20 or 30 km / h in cores / city centres and neighbourhoods. It is clarified that the 186 km of bike lanes do not include the common areas as well as the existing bike lanes on the motorways (e.g. Astromeriti-Troodos road, etc.).

The aim of the Ministry of Transport and the Government is primarily to create a safe and functional road network for all users, which will contribute to the enhancement of sustainable mobility and efforts made to reduce pollution and protect the environment.