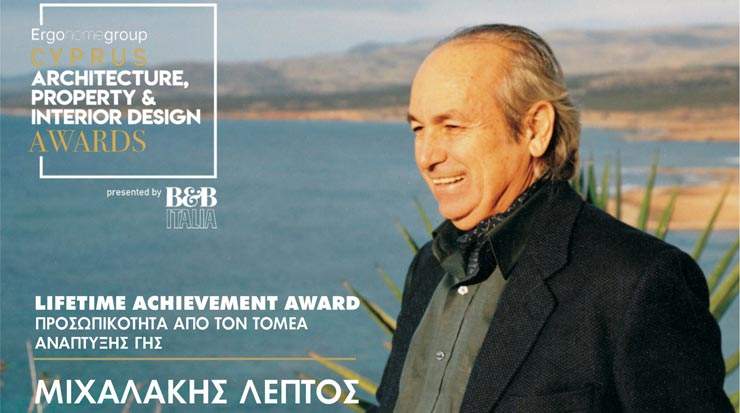 Michael Leptos, founder and executive chairman of the Leptos Group of Companies, was posthumously honoured with the Lifetime Achievement Award at the Cyprus Architecture, Property and Interior Design Awards held in Nicosia on  March 17.

The pioneering developer was selected as a recipient of the award in recognition of his outstanding accomplishments in the land development and real estate sectors. As a man who never rested on his laurels, Leptos undertook new ventures and projects that helped put Cyprus on the global property map.

Leptos passed away in January this year. He hailed from Kyrenia, but relocated his business to the Middle East and the Arabian Gulf following the Turkish invasion of Cyprus in 1974. One of his groundbreaking projects was Saudia City, a large-scale development of 4,000 housing units, commercial centres, sports grounds and parks located in Jeddah.

Upon his return to Cyprus in the 1970s, Leptos fell in love with Paphos, and played a leading role in turning the district into what it has become today. His flagship project, among many other residential developments, was Kamares Village, with over 1,000 villas, and is today the largest holiday home development in Cyprus.

Under the umbrella of the Leptos Group of Companies, Michael Leptos established and developed a chain of hotels and resorts in Cyprus and Greece, and furthered his activities in Limassol with two, high-rise game changing developments that have redefined the city’s skyline.

He established the Neapolis University in Paphos, a thriving academic institution with students from around the globe, as well as the Iasis Private Hospital, a leading medical and surgical centre in Paphos. His vision for Neapolis – a world-class sustainable ‘new city’ of eco-intelligence – garnered international recognition as a prototype ‘Smart EcoCity’ within the European Union.

Leptos was also the honorary consul of Jordan in Cyprus, and served for many years as the president of the Cyprus Land Developers Association. His passing sparked an outpouring of grief in the real estate world, leaving behind an incomparable legacy.