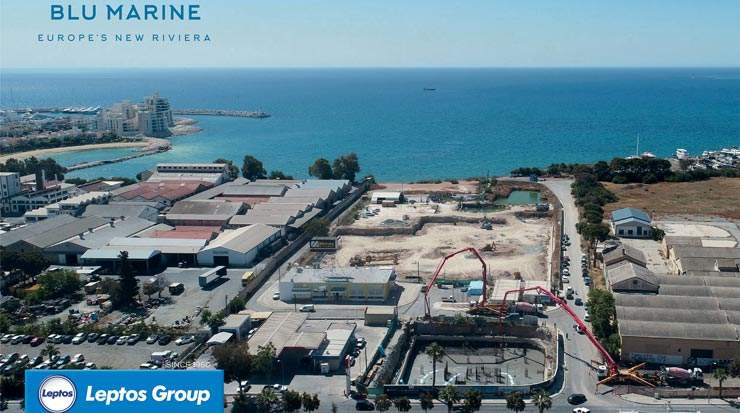 Construction is in Full Swing at Limassol Blu Marine

In late May, 300 tons of reinforcement steel was used at the construction site of Limasssol Blu Marina, with 1,500 cubic metres of high-strength concrete, and 12 hours of casting, the 60-men construction crew that were working day and night.

25 percent of the structural frame works are already completed. Construction milestones completed so far include the main structure piling, shoring for excavation and dewatering, main raft foundation and the waterproofing of basements.

The Leptos Group is set to increase its presence in Limassol in the coming years. This area is rapidly transforming into a thriving central hub with a plethora of high-end facilities and services on its doorstep.

The construction of the Leptos Group’s Limassol Blu Marine will contribute significantly to the Cypriot economy through the creation of new jobs in both the construction and services fields. Limassol Blu Marine has already attracted interest from foreign investors and a large number of buyers of high-end, luxury apartments, and aims to establish the area as a prime location for new Cypriot and foreign companies dealing with innovation, technology, finance etc.

Limassol Blu Marine is a mixed-use development of international standards, located on the west coast and at the heart of Limassol, in an area that has experienced rapid growth in recent years with the development of large-scale investments. A thriving business hub, and in the midst of a major urban regeneration planned by the Municipality of Limassol, Limassol Blu Marine is positioned in front of Aktaia Odos, an area that includes Limassol Marina, My Mall, Dubai World Cruise Terminal, an international championship golf course, and the construction of the largest integrated casino resort in Europe.