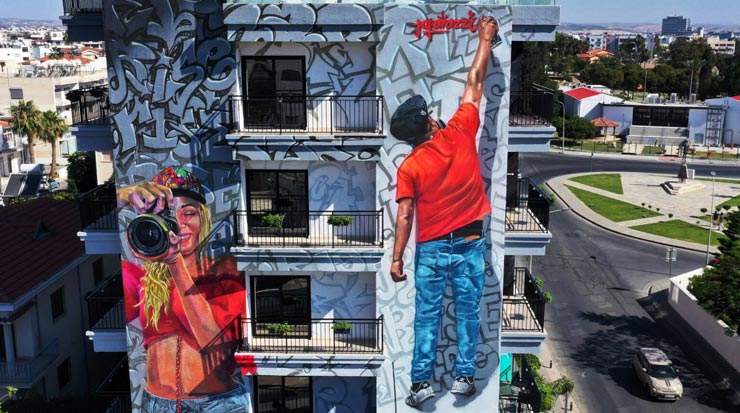 Rise Graffiti Hotel will be the Cyprus’ first graffiti hotel and will showcase the value of street art in Larnaca’s city centre.

Its location is a specially designated spot for people to take photos and has also been designed where at the right side of the lobby real suitcases lining the wall are showcased and a painted girl that appears to be sitting on them.

The artwork is not confined to the funky portraits and typography that cover the entire exterior of the building, but continues on the interior, including the whole reception area and the 42 guest rooms. Each room has a different character, and mainly feature famous personalities, while some showcase local landmarks and animals.

The uniform of the hotel’s staff also incorporates graffiti, while some of the staff are sporting artwork on their actual bodies since they are tattooed.

Six street artists collaborated for the project led by Achilleas Michaelides, aka Paparazzi, using photographs of everyday people and their artistic licence. The team included Alex Martines, who flew in from Greece to help, Yeti, a fine arts student in Athens, Pest, who recently moved to Cyprus from Zurich, Switzerland, Russian Andrey Zhokhov who is a visual artist in his 50s and Sasha Stylianou who used to live in South Africa.